This blog post is part of the Mixmax 2017 Advent Calendar. The previous post on December 10th was about Understanding query performance in Mongo.

The Mixmax Insights dashboard is like Google Analytics for your mailbox. How many messages did I send? How many were opened? How many received replies? How do I compare to the rest of my team? 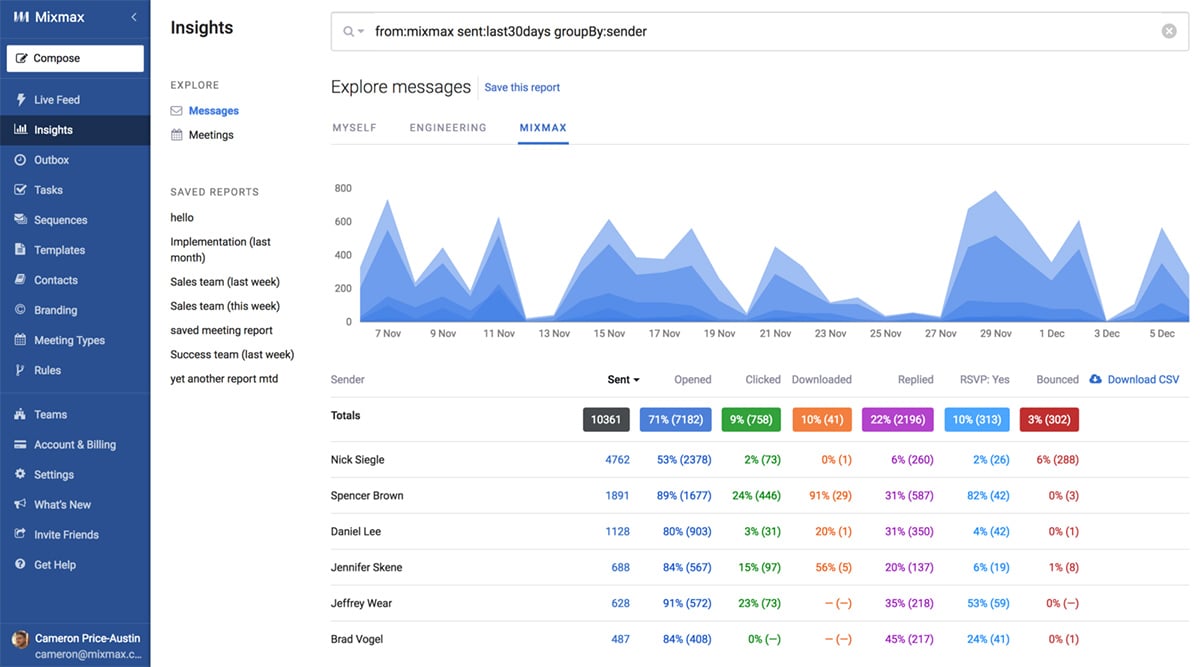 Just like Google Analytics, it provides a number of predefined views, but also lets users create custom reports based on their own filters and queries.

Under the hood, we use Elasticsearch to aggregate the data for these reports from a fairly large (~2 billion) dataset of messages.

We decided upon Elasticsearch after benchmarking a few candidate solutions, including AWS Redshift. As part of the Mixmax Engineering Blog Advent Calendar, I’ll explain the benchmarking process and results.

Our solution needed to respond in real-time to ad-hoc, user-defined queries, returning aggregate statistics on matching messages, grouped by one or more fields (sender, time etc).

Ideally, it also needed to be capable of serving existing analytics elsewhere in our app, such as the sequence reports and live feed, which at the time were served using an ugly system of pre-cached fields in Mongo.

It needed to operate at our current scale, house at least twelve months of historic data, and be capable of growing with our customer base, continuing to serve our needs for at least the next year.

We use Mongo as our primary data store, so the idea of using a familiar technology was attractive. We figured we might be able to use Mongo’s aggregate feature across a single, large, heavily-denormalized collection of messages.

Like Mongo, Elasticsearch was already part of our stack. We’d been using it to serve our live feed and had already found it quite capable of producing aggregated analytics in real-time (despite some early teething issues).

Redshift was, in our mind, the gold-standard of data warehousing and retrieval. Our team didn’t have any experience with it, but we knew of other startups who employed it for similar use cases.

Message data has some one-to-many relationships. For example, each message has one or more recipients. In our system, it can also contain zero or more templates, and each user (and therefore their messages) can belong to zero or more teams.

Mongo and Elasticsearch allow us to express these relationships on a single document (using Array types), but Redshift is relational, and required additional tables. Our final schema for Redshift was:

We distributed all tables on the message id. For messages, this essentially distributed rows across nodes in a round-robin. For the FK tables, this ensured they were co-located on the same node as their parent message.

Mongo needed to be excluded early on. It completely choked at this load profile, taking ~10 minutes (!) to return results. Elasticsearch and Redshift performed better:

Taking the speed average and plotting it as a function of estimated monthly cost:

Elasticsearch was the clear winner. It was the fastest (by far) and comparatively cheap.

This was surprising. We don’t have much experience with Redshift, but it seems like each query suffers from a startup penalty of ~1s (possibly Redshift analysing the query and splitting it between nodes?). It might be more suited as a solution for data scientists rather than as part of an application stack.

We’ve now been using our Elasticsearch reporting cluster in production for about six months and performance has been great (especially on Elasticsearch v5). We did need to upgrade to a 32GB instance as we added additional indexes, but overall the performance-to-price ratio is still excellent, and we’ve been happy with our choice.

Have a knack for engineering solutions to software problems that prioritize user experience? We’re hiring!